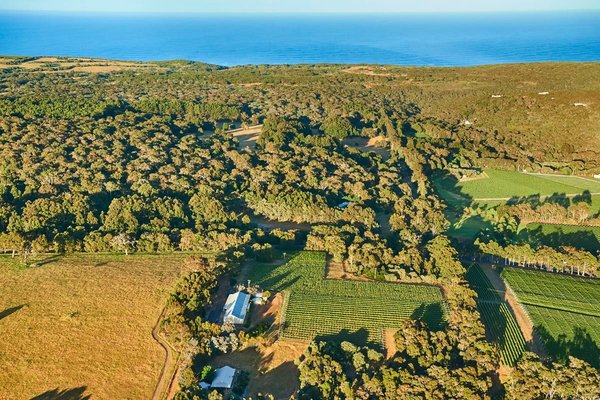 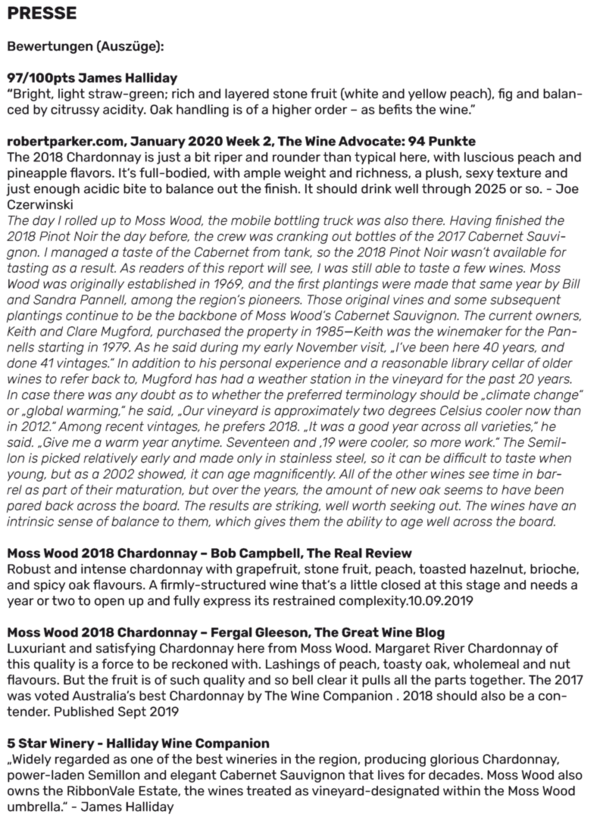 The hue is medium to deep straw with a green tint; condition is bright.

All the features that give Moss Wood Chardonnay its distinctiveness are on display. The fruit aromas are of peach, orange marmalade, honeysuckle and quince, plus, of course, the usual roast nuts and oat biscuits. There is a light toasty background from the barrels and a touch of caramel and crème brulee from the malolactic fermentation.

The palate is full bodied with good acidity and tannin but this firm structure is well and truly complemented by the fruit flavours. There is an array of peach, lime, quince and caramel that provide length and breadth and the finish shows some soft, toasty oak and just enough tannin for good cellaring.

As with all Moss Wood Chardonnays it is very attractive now and can certainly be enjoyed as a youngster. However, it will repay patience and we recommend it be cellared for at least 10 years to allow it to show some bottle age. Full maturity will be reached at 20 years of age.

Colour and condition:
Medium to deep straw hue, with green tints and in bright condition
Nose:
Very generous Chardonnay stone fruit-like aromas of peaches and nectarines, combined with the typical Moss Wood complexities of orange marmalade, honey, caramel and roast almonds. The near 50% new barrels have given a lightly toasty background.
Palate:
Here the wine replays the combinations of the nose, with stone fruits, oranges and caramels combining to give a rich but lively feel. This length and depth of flavour is underpinned by crisp acidity and a well-hidden but firm tannin, ensuring the right sort of structure for good cellaring.

Often our wine stories are a narrative of how we struggled against the many challenges Mother Nature threw at us before we finally triumphed, against near impossible odds, to produce a high-quality wine. Well, with the Moss Wood 2018 Chardonnay, there will be none of that. Quite the contrary in fact.

In reviewing the 2017/18 growing season, we were reminded of how good it was - one of those rare years when just about everything worked in our favour. We enjoy them when they come around but often take them for granted. For example, 1991 was very much a vintage that went by without incident. This may sound odd but we often get a pleasant surprise when the young wines start to reveal their quality when really, there should be no surprise at all. We hope you don’t find this boring!

Our Spring weather was near perfect. The calendar year 2017 produced just over 10% above average rainfall, with a total of 1117mm, so the soil was nicely topped up with moisture. However, very conveniently, the flowering period wasn’t too wet and we had regular showers but no downpours, so they did little harm to the process. These were accompanied by temperatures that rarely dropped below 8°C, so the vines loved that as well.

Through Summer, temperatures remained moderate, so while the vines didn’t rush through their ripening, the season was roughly a week longer than average, they made steady progress and reached full maturity of both sugar and flavour with ease. Furthermore, they experienced only 13 hours above 33°C, so there was absolutely no heat stress. In fact, for a while we were concerned temperatures may have been a little too mild but in the end these fears were unfounded. The vines had flowered right on their average date of 5th November and had plenty of time to get the job done.

To note how mild our Summer was, the hottest day was 14th January, when the mercury topped out at 39.1°C but apart from that, the temperature rarely went over 33°C.
We had no issues with disease or damage from pests like the birds and we cruised into the Chardonnay harvest on 7th March. The yield of 6.15 tonnes/ha was down by roughly 10% and the ripeness was 13.5° Baume, very slightly above our average of 13.1.

All the fruit was hand-picked and delivered to the winery where it was whole-bunch pressed. The must was cold settled for 48 hours then the clear juice was racked and seeded with multiple yeast strains for primary fermentation. At approximately halfway through ferment, on 18th March, the juice was racked to wood. All the barrels were 228 litre French oak and 56% were new. The wine also underwent a full malolactic fermentation and once completed, all the barrels were racked, blended and adjusted in stainless steel. The finished wine was then returned to barrel.

On 25th June 2019 all barrels were racked and blended in stainless steel and fining trials were carried out. None of the agents offered any improvement so the wine remained unfined, apart from a bentonite addition for protein stability. To complete the process, the wine was sterile filtered and bottled on 12th July 2019.

Snapper, or another firm white-fleshed fish, with a butter and dill sauce, served with potatoes and steamed vegetables

The 2018 Chardonnay is just a bit riper and rounder than typical here, with luscious peach and pineapple flavors. It's full-bodied, with ample weight and richness, a plush, sexy texture and just enough acidic bite to balance out the finish. It should drink well through 2025 or so. - Joe Czerwinski

The day I rolled up to Moss Wood, the mobile bottling truck was also there. Having finished the 2018 Pinot Noir the day before, the crew was cranking out bottles of the 2017 Cabernet Sauvignon. I managed a taste of the Cabernet from tank, so the 2018 Pinot Noir wasn't available for tasting as a result. As readers of this report will see, I was still able to taste a few wines. Moss Wood was originally established in 1969, and the first plantings were made that same year by Bill and Sandra Pannell, among the region's pioneers. Those original vines and some subsequent plantings continue to be the backbone of Moss Wood's Cabernet Sauvignon. The current owners, Keith and Clare Mugford, purchased the property in 1985—Keith was the winemaker for the Pannells starting in 1979. As he said during my early November visit, "I've been here 40 years, and done 41 vintages." In addition to his personal experience and a reasonable library cellar of older wines to refer back to, Mugford has had a weather station in the vineyard for the past 20 years. In case there was any doubt as to whether the preferred terminology should be "climate change" or "global warming," he said, "Our vineyard is approximately two degrees Celsius cooler now than in 2012." Among recent vintages, he prefers 2018. "It was a good year across all varieties," he said. "Give me a warm year anytime. Seventeen and '19 were cooler, so more work." The Semillon is picked relatively early and made only in stainless steel, so it can be difficult to taste when young, but as a 2002 showed, it can age magnificently. All of the other wines see time in barrel as part of their maturation, but over the years, the amount of new oak seems to have been pared back across the board. The results are striking, well worth seeking out. The wines have an intrinsic sense of balance to them, which gives them the ability to age well across the board.

Robust and intense chardonnay with grapefruit, stone fruit, peach, toasted hazelnut, brioche, and spicy oak flavours. A firmly-structured wine that's a little closed at this stage and needs a year or two to open up and fully express its restrained complexity.10.09.2019

Luxuriant and satisfying Chardonnay here from Moss Wood. Margaret River Chardonnay of this quality is a force to be reckoned with. Lashings of peach, toasty oak, wholemeal and nut flavours. But the fruit is of such quality and so bell clear it pulls all the parts together. The 2017 was voted Australia’s best Chardonnay by The Wine Companion . 2018 should also be a contender. Published Sept 2019

"Widely regarded as one of the best wineries in the region, producing glorious Chardonnay, power-laden Semillon and elegant Cabernet Sauvignon that lives for decades. Moss Wood also owns the RibbonVale Estate, the wines treated as vineyard-designated within the Moss Wood umbrella." - James Halliday